Posted at 10:31h in Other Films by noorhn 0 Comments

ASTROPHYSICS AND ANGELS IN MONOTHEIST RELIGIONS.

Let’s start the search for answers.

To the main question about what explanation I have for these living beings, I avoid to add surprises to the reader who is already burdened with implausibility, and I refer to literature with analogies to what is mine and what our ancestors have observed and left written. Or to what the sciences already supported, and I repeat it.

If together we are walking through another World, I call it the Parallel Universe because it is a cloned copy of the one previously announced by Astrophysics, and because of its intrinsic coincidences, it cannot but be the same space that religions explain as destiny. of souls, which is where the Celestial Hierarchies reside in their own Invisible Dimension.

They are intelligences and their habitat, in which one explains and supports the other, and there is no justification for denying one without the other, because if you did, you would also be able to deny the scientific hypothesis of the Parallel Universe, since they both drink from the same fountain. And if the men of science say nothing about whether or not it is inhabited, and by whom, I think it is because that does not concern them for now. I discover an Inhabited World preannounced and known in both orders of knowledge.

Let us transfer this concern to religious texts and not to computers and their simulations, where they explain themselves and the experiences that have already existed in the past with these ethereal beings. If you go through the libraries in search of texts that enlighten you on similar beings, you should orient yourself to the ancient documents of religions. Let’s see the basics of them.

In Judaism, in the Tanach, with other names in the Torah and in the Talmud, Job, 48: 7, the stars participate in the formation and understanding with the angels. An absolute correlate with our filmed model. The description of the Hierarchical Court is more complete with the cherubim and the sefarim, which are terrifying, which is why they are not the messengers. Our coincidences continue. All, chronologically, appear on the 4th day before man. Angeology, according to Azriel Bibliowic “… is the great legacy that the Zerbanites transmitted to Jews, Christians and Muslims …”

In Islam, and in the Koran as its source, it recognizes angels, generally white, born of light, as anthropomorphic beings at times, abstract and incorporeal, identical to ours, and they are considered the first creation of God. They neither eat nor drink and are unaware of anger.

In Christianity and because of its origins in the Old Testament, which added to the Gospels, we begin with the fact that the Father sends his Son in human form, ergo, it is because in the Celestial Dimension they have no traits of humanity, not finding anyone who say otherwise, and we continue in that there are about 300 quotes to angels, those who cannot be different from the God they serve, in whom “their appearance is totally unimaginable”, as John 4:24 says, and that also it arises for us after insisting on our views and readings.

And yet I observe a perfect harmony when they are likened to angels with beings with sporadic appearances, or with white rays, or others in which the first contact prevents it by saying “do not fear me”, “do not be afraid”, of luminous clothing and that caused fear and fainting, and that suits our case, due to their full similarities with those shown in these videos, which are not limited to their morphological constitutions and tones, but with a greater breadth of not only their lives, but also their them within their planetary scaffolding, to such an extent that it constitutes an authentic self-sufficient time-space dimension of the invisible and intangible life existing throughout the Cosmo, although whoever investigates may make their own conclusions.

But do they not feel that they are invading the intimate sphere of a Dimension of Pure Nature, and of Creative Force above and before ours?

THIS DESCRIPTION TO THE VIDEOS THAT I LEAVE BEHIND, IS NOTHING MORE THAN THE GRAPHIC, DOCUMENTED AND ANIMATED CULMINATION OF MY THEORY OF THE 4TH. COLOR PUBLISHED IN 2018, IN THE ARRIVAL TO THE SAME RESULT BUT FOR THE REASON AND FORMAL LOGIC.

COLLISION AND SUPREMACY OF LIGHTS

Comments come to me that this event is not fully understood, so I decide to repeat it with the assistance of whoever turns on the lights one by one, beginning with the flash due to the irruption of infrared lights in their encounter with the “Garden Light “from the other Dimension, which you already know, to continue with the minor effects caused by LED lights, demonstrating its degrees of tolerance. Only the general lights of the gallery (which when turned on, automatically turns off the infrared light of the cameras) and three spotlights that inside the Noorhn Tent, affect it totally or reduce it to a smaller scale.

I place between us, the same metal tray used to demonstrate last year, that this same “light that is not light” at its birth emerging from the Metallic Core in the center of the planet, had the attribute of Always Visible, which is not seen now , which is likely by not putting the tray above the light. I don’t have cameras from that angle.

The light in the lounge chair is from the other Dimension.

It irradiates homogeneously in a radius of 8 meters, which is smaller, given the measure of its source, but which I conjecture is due to the fact that its function is not to be a port, but to be a planetary linear arrangement. I have followed it from its first appearance that it was only like the brightness of a micron of silicon from the sand, emerging as visible from its depths, and that supporting it the metal disappears to the human gaze and only lends itself to the cameras. I hope to mend this situation. In the initial shock of lights, it surpasses that radius. In the photo, it shows the led light on the right that I turn off, which is the refuge of the “Grid”, so that it is not confused as to which or where the source of their generation is. 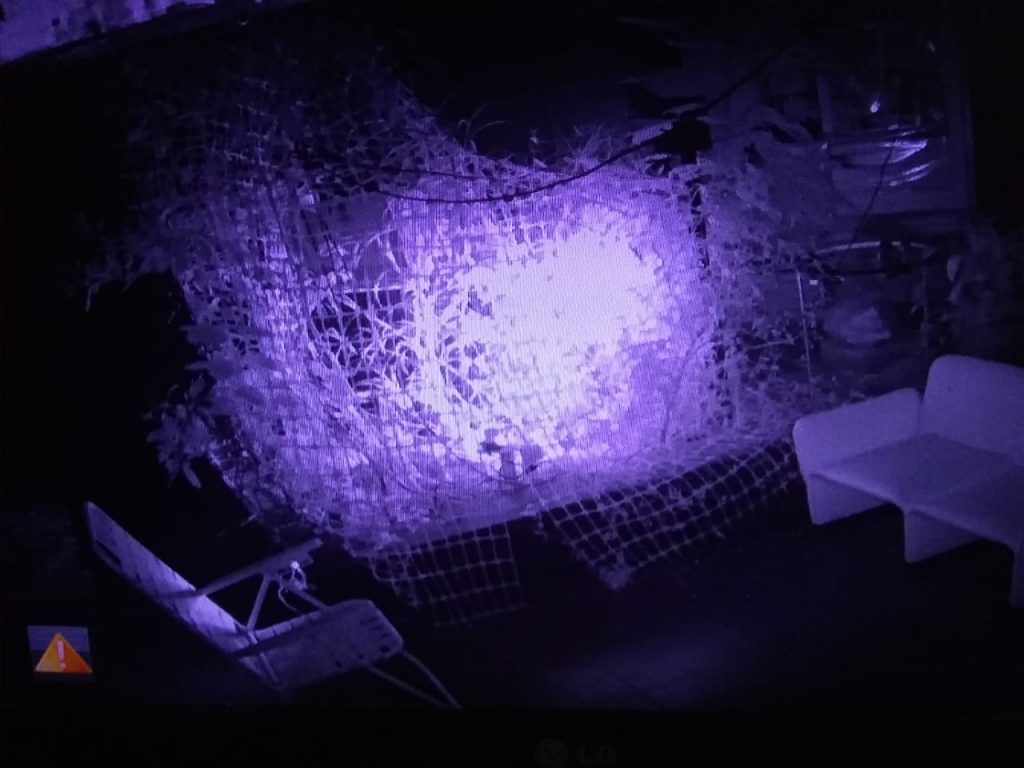 FROM MY CELL PHONE I FILM THE COLLISION AND SUPREMACY OF LIGHTS. IMITATION AS IF THE READER WERE HERE.

To the left and in the dark, little is seen to the gallery and in orange to the Tent of Noorhn

On the right they see the screen that shows the same thing and that Tent in another Dimension and therefore there is a greater luminosity of the place, despite the fact that the infrared lights of the camera have not yet been turned on

A large collision of lights occurs. And although it is not seen, it is to be supposed that from a great collision we can expect certain energies released by the friction of its elementary particles.

I ask. Isn’t it the best opportunity for the scientist to measure, in his own way with a portable instrument of the case, some bias of some physical or quantum force, which from that Dimension transcends to ours?

And so they would be able to say, technically and scientifically admissible, “Yes, the other universe exists”

CONFIRM THE PRINCIPLE OF PANSPERMIA?

It is essential to inquire about these foreign specimens from the Other Dimension, of organic and visible matter, that live and reproduce here, but of doubtful origin. Its implications may have no limits regarding the origin of life on our planet.

They interact with our species and look at each other, as we have seen the toad act in this way before. Today we see him try to hunt or cover himself with his fragile wings. In another scene, an innocent ant approaches him and he is forced into flight.

At that time, he only had the assurance of the “green and eyed” and not by the other two, because he was the only one that the witness camera did not see, that is, he was not visible in our Dimension, a subject that had not made clear that time. The other two insects did not enter the sights of the witness camera, the only way to give security to third parties, but not to me than to the first visual contact with all of them, I already acquire the certainty to which fauna and dimension they belong.

These species accompany the tiny intelligent beings of the stone in the Noorhn Colony.

But we recognize our species even outside those cameras, in harmony with our holistic perspective, confirming my hypothesis.

But how far do we go with so many strangeness? It gives reason to the reality of the Panspermia principle even if it is based on intuition. It questions our very origin. If he dares so much to suspect that man is also the fruit of the other Dimension, resulting in a just and deserved consequence of being possible that our fellow men can also have a dwelling in any corner of other galaxies, a subject that has always taken care of me, waiting for the science of its verdict. That is why I always call it the First Dimension, because it is the force of Creation, before and above us.

I place a dry segment of 3 mm by 4 cm, in front of the camera to film insects that pose on it, not knowing yet what is the connection of these beings with still life, but if there is.

Today the opposite happens and they are the intelligent beings that surround it by the intensity of the infrared.

Night of April 23 and first hours of the following 24.

Faced with doubts about how the Solcito was ahead of my face without an apparent reason, or that it could be a matter of putting the witness camera (or in our Dimension) next to the other, today taking advantage of the splendid Sun, of acid to repeat as proof .

But this time, I put the witness camera above another, unable to avoid a 0.4 cm shift away from their sights – which are the Solcito and my face leaning on the back of the chair – meaning almost nothing, if targets are 3.60 away.

They are two changed scenes. In the real film, my face is seen, as seconds before I saw it with my eyes, distant, boy, and ahead of that Astro Rey, without my face covering him. In the camera that films in the other dimension, everything is different. El Solcito is ahead of me, it is large with two lights, and it definitely covers me, without a doubt that he will not justify repeating this.

THE SUN OR THE MOON PLAY TO CONFUSE US

It’s not just tonight. I have lost count of the months in which the Moon must be orbiting us at night, it shows the dull rays of the diurnal Sun, or the same Sun escorted from two planets, which I suppose are Mercury and Venus.

But how we see an ancient space and without being sure to which record we belonged, the answer will perhaps be an Astronomer.